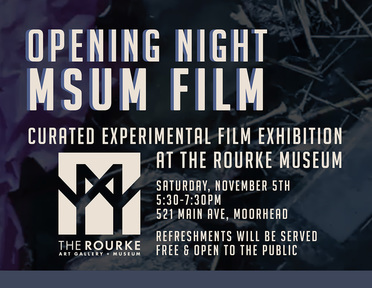 Minnesota State University Moorhead’s Film Studies program is unique to the state of Minnesota and the Tri-State area. Founded by Ted Larson, brought to greater growth by Rusty Castleton, the program began with a focus on studies and analysis but has included a strong focus on Film & Video Production for over a decade.

The films and videos included in this exhibition represent a vital and thriving aspect of our program: a focus on experimental filmmaking and video art.  These films, created by current students and alumni of the program, were chosen for their consistent yet varied use of experimental methods and form.  The curated work in this exhibition represents only a fraction of the film and video work created yearly through our School of Media Arts & Design majors.